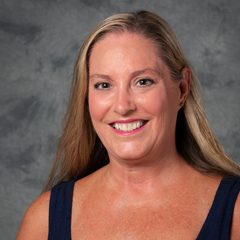 Julie Nester has served on the San Diego RIMS Board for 4 years and serves on the 2022 Membership and Golf Committees. Here’s her story...

Julie was born in Oxnard, California and was raised in Colchester, CT. She attended Eastern Connecticut State University and received a Major in English and a Minor in Sociology.

Julie is a Senior Manager of the Property and Liability Program for the San Diego Schools Risk Management JPA and her work affects the lives of more than 50,000 residents of San Diego County. In this position, Julie leads the Loss Control and Internal Claims Teams, and provides training to and secures insurance for 67 school districts in San Diego. Julie began her career journey as a Workers Compensation “Green Phone Operator” for Travelers in Hartford, Connecticut. She stayed with Travelers, but moved to their San Diego office to assist Workers Compensation Claims Adjusters. Next she worked for California Compensation as a Claims Supervisor, then the UCSD Department of Orthopedics as a Workers Compensation Case Manager. The bulk of Julie’s career thus far has been spent at Jack in the Box, where she began her 14 year tenure as a Workers Compensation Claims Manager and ended as a Risk and Claims Manager for all lines of insurance. Because I know everyone is wondering, she DID get free Jack in the Box food occasionally, and also signed up to participate in sensory panels where she taste-tested new products and product changes.

When she is not working for the San Diego Schools or serving on the San Diego RIMS Board, Julie enjoys skiing, golfing, reading good books, going to the beach and hiking. She has a poodle/chihuahua mix named Oscar and in a recent personality test, it was determined that she is all WOO!

Julie loves the industry networking and education sessions that San Diego RIMS has to offer and invites you to join her at a meeting.